On November 14, 2019, Bharti Airtel and Vodafone Idea both reported historic losses for the quarter ended September 2019, largely on account of provisions made for adjusted gross revenue (AGR)-related liabilities. Earlier, the Supreme Court upheld the definition of AGR as prescribed by the Department of Telecommunications (DoT), resulting in arrears (along with interest and penalty) of about Rs 800 billion between the two incumbents.

To put things in perspective, Vodafone Idea posted a loss of Rs 509.22 billion for the quarter July-September 2019. This is the highest ever quarterly loss for a corporate in India and 10 times the loss the company had reported for the same period last year. Bharti Airtel was better off, but only relatively. It reported a loss of Rs 228.3 billion in the same quarter as against a profit of Rs 1.19 billion last year.

Both telcos are cash starved and Vodafone Idea has even hinted that continuing as a going concern would be a challenge, unless it receives substantial relief.

Airtel is no doubt better placed to deal with the crisis owing to its regular fundraising and a recent equity infusion by shareholders. However, Vodafone Idea is in a sticky situation with both its parent companies – UK-based Vodafone Group and India’s Aditya Birla Group – not willing to infuse further equity in the venture.

As of the quarter ended September 2019, Vodafone Idea’s net worth stood at Rs 240 billion. Its net debt stood at Rs 1.02 trillion and its cash balance stood at Rs 153.9 billion during the reporting quarter, way lower than the amount it owes to the government for AGR-related dues. In October, following the AGR ruling, CRISIL and CARE Ratings put the telco on a negative credit watch. It is now being reported that the company’s creditworthiness may be further slashed to BBB-/junk category. A rating downgrade will dampen Vodafone Idea’s chances of raising additional debt to pay its dues.

Although Vodafone Idea’s situation was precarious even before the AGR judgment was pronounced, the ruling has pushed the telco into an existential crisis of sorts.

Vodafone and Idea have been present in the Indian telecom market for over a decade and have had a fairly good run. The entry of Reliance Jio Infocomm Limited in 2016, however, caused an unprecedented disruption in the market with the company offering free voice calls, bundled with highly affordable 4G data packs. The incumbents responded by slashing their tariffs and in the process, took a massive hit in profitability. They could ill afford the discounted rates that a new telco like Jio could, given that the latter came with a massive 4G build-out and, of course, a large stash of funds courtesy its parent, Reliance Industries Limited. In hindsight, the incumbents should have been more prudent and innovative in their counter-strategy and not have merely followed suit, analysts note.

The Vodafone-Idea merger in 2017 was conceived to give firepower to the combined entity and enable it to overcome competitive pressures in the market. However, the merged entity has not seen any profit till date. Its EBITDA continues to be under pressure despite operational synergies kicking in. Its ARPUs at Rs 107 have been much lower than Airtel’s at Rs 128 and Jio’s at Rs 120 during the period July-September. Last year, the cut in interconnect usage charges (IUC) crippled Vodafone Idea’s revenues; now, the AGR judgment has delivered a body blow to its fragile finances, severely denting its ability to compete in a three-player market. “It looks increasingly plausible to believe that, in the absence of any serious relief, the Indian telecom space may get reduced to a two-private-player market,” reads a recently released note by SBICAP Securities.

Clearly, the Vodafone Idea debacle has ramifications for the sector as a whole. As analysts point out, a duopoly is much less stable and competitive than a three-player market structure. The former has fairly high chances of either mutual destruction or collusion, both of which ultimately harm consumer interests.

Importantly, if Vodafone Idea were to go into insolvency, it would end up creating the biggest non-performing asset for lenders, adding to the woes of an already strained banking sector. Moreover, when a large global player like Vodafone Plc, which has been India’s poster boy for foreign investment, writes off its investments in the country, it is demoralising for not only the sector but the economy as a whole.

Recourse through a corporate insolvency resolution process will not be easy for the telco. The treatment of spectrum as an asset under insolvency proceedings continues to be a grey area in the minds of investors. Aircel, the first telecom company to face IBC (Insolvency and Banking Code) proceedings, is yet to receive approval from the National Company Law Tribunal for its resolution process.

Need of the hour

To tide over the crisis in the sector, telecom operators are seeking some remedial measures from the government. According to Rajan Mathews, director general, Cellular Operators Association of India (COAI), “Debt restructuring of some sort must be considered immediately. A longer tenure for payment of spectrum liabilities will give telcos a window to recoup their cash flows.” If the government agrees to defer spectrum payments, it would give a lifeline to Vodafone Idea. The telco has also sought relief from payment of interest, penalties, and interest on penalties in the AGR case. However, DoT has already issued notices to telcos for payment of dues within three months.

Further, licence fee (LF) and spectrum usage charges (SUC) should be brought down substantially, as they erode 12-13 per cent of a telco’s top line. Industry analysts also note there is an urgent need to relook at the arrangement of collecting LF/SUC in the form of revenue share. This arrangement was established two decades ago, at a time when spectrum was administratively allocated by the government. However, since 2010, telcos have been purchasing spectrum through an auction mechanism, wherein the government collects spectrum fees (a hefty one) upfront. In such a scenario, there is little justification in continuing to collect LF/SUC in the form of a revenue share. Some analysts suggest that the centre should discontinue revenue sharing with retrospective effect from 2010 onwards, thus bringing down the telcos’ outgo on AGR substantially.

The government should also look into the telcos’ request to expedite the refund of input tax credit for GST, which stacks up to Rs 350 billion at an industry level. This would help in overcoming liquidity constraints to some extent.

Then, there is the issue of zero IUC, which needs to be addressed at the earliest. Airtel and Vodafone Idea are of the view that IUC should not be removed, at least not for the next three years. Vodafone Idea gets about a third of its operating profit from net IUC receipts and making IUC zero would further weaken its financial position.

The industry desperately needs a long-term solution. A committee of secretaries (CoS) headed by the cabinet secretary, Rajeev Gauba, is reportedly working on a relief package for the sector. Aside from a relief package, what is also needed is some serious thinking around tariffs, which are currently at suboptimal levels.

In fact, fixing the pricing issue holds the key to the sector’s long-term sustainability. Jio’s entry brought in an era of zero voice tariffs and rock-bottom data tariffs. As per Kotak Institutional Equities, consumer spends on mobile services have fallen from Rs 1.8 trillion to around Rs 1.2 trillion in the past three years. This has had a debilitating impact on the incumbents’ profitability. There are reports that the government may ask the Telecom Regulatory Authority of India (TRAI) to review floor pricing. Such a move may put an end to the brutal price war amongst telcos. DoT has estimated that a 10 per cent increase in tariffs could help improve telco revenues by about Rs 350 billion.

But regulating prices in a market where the regulator has preferred forbearance for over 16 years presents a predicament of sorts. Besides, most developed telecom markets globally do not have pricing strictures. Analysts also point out that since 2G, 3G and 4G each has different capex requirements, setting a uniform floor price would be a challenge. 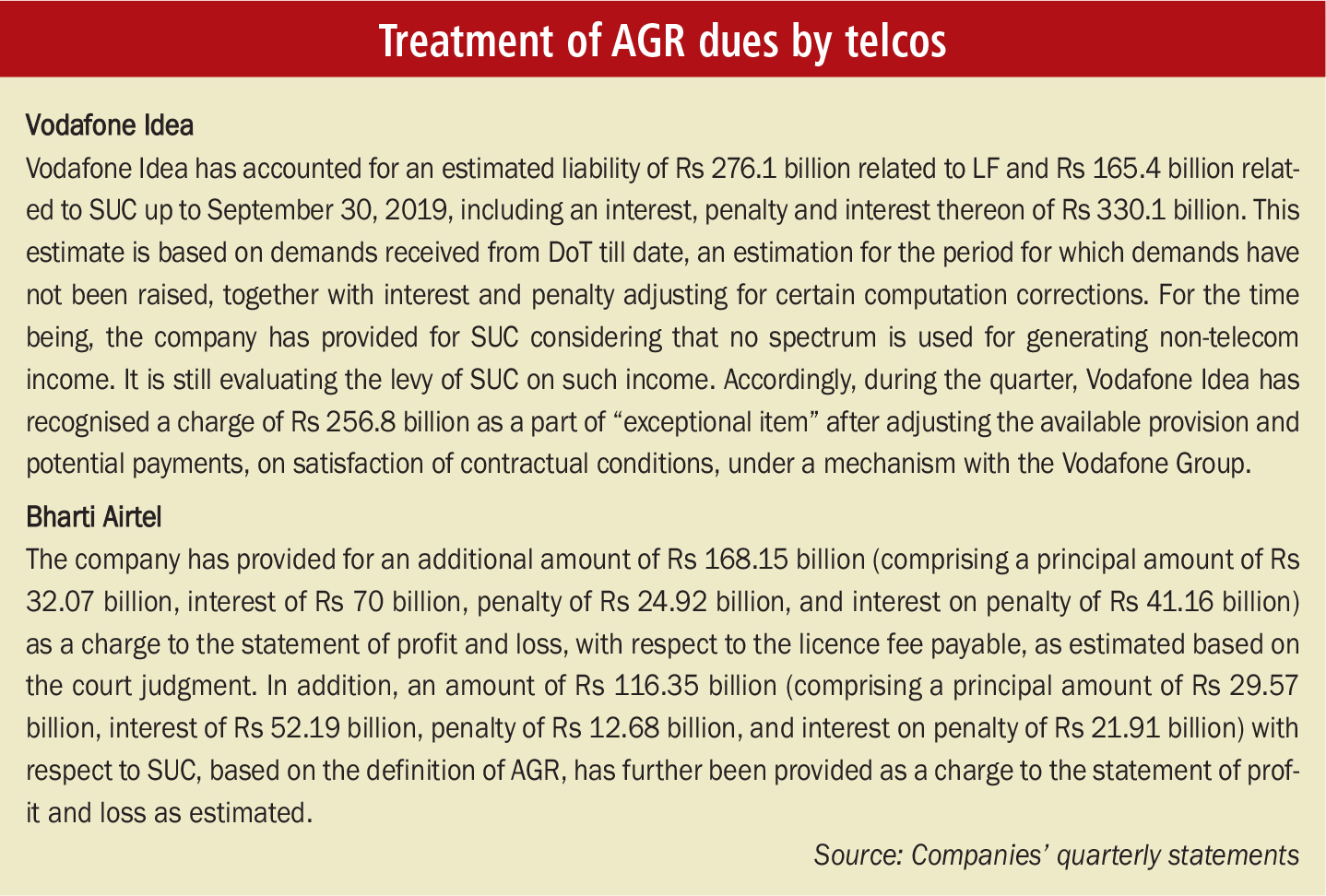 So, what happens to Vodafone Idea now?

That, indeed, is the big question industry is asking. Experts believe that Vodafone Idea’s survival is crucial, for several reasons. Can the sector survive the exit of a player that serves 311 million subscribers? Would Airtel and Jio be able to absorb these subscribers given their constrained network capacities (Jio does not even have 2G/3G infrastructure to cater to them)? And can a meaningful 5G spectrum auction be conducted between two players, of which Airtel’s participation looks doubtful at the moment?

From a big picture perspective, Vodafone Idea’s future will have a strong bearing on India’s attempt to emerge as a preferred foreign investment destination. Investor confidence in any sector is rooted in predictability and visibility in terms of long-term growth prospects, which, in turn, is a function of sound policies and regulations. As Dr Mahesh Uppal, director, ComFirst, points out, “Profit and loss in a regulated sector like telecom do not depend on the companies alone. The government and TRAI too have a responsibility to create an environment that attracts serious investors to pump in the large sums needed to create and upgrade the networks of tomorrow. India cannot afford a short-sighted approach to infrastructure.”

The telecom sector is the backbone of India’s digital vision and will be instrumental in achieving the $5 trillion GDP target by 2024. The government must take cognisance of this and undertake appropriate measures to tidy up the sector’s financial mess. After having stepped in to revive telecom PSUs BSNL-MTNL, it’s time now to act in support of the beleaguered private sector incumbents. Else, the industry could well be staring at a crisis it will find difficult to survive.

(As we go to press, the CoS is studying ways to bail out the telecom industry. Its outcome is awaited.)