The Sagarmala programme was launched by the central government in July 2015. More than four years have gone by since then. There have been some hits and some misses, some achievements and some disappointments. Progress under the port modernisation and port connectivity components has been quite visible. Some key milestones have been achieved such as the start of container movement on inland waterways; completion of multimodal terminals in Varanasi and Sahibganj (as part of the Jal Marg Vikas Programme), the fourth container terminal at the Jawaharlal Nehru Port Trust (JNPT) and the port-based mega food processing park in Kakinada; and expansion of the Salaya-Mathura crude oil pipeline. However, since its launch, about 70 per cent of the projects are still at the feasibility or preliminary/planning stages.

The Sagarmala programme aims to promote port-led development (both direct and indirect) and provide infrastructure to transport goods to and from ports in a quick, efficient and cost-effective manner. As part of the programme, more than 574 projects worth Rs 6 trillion have been identified for implementation during 2015-35 across its four pillars – port modernisation and new port development, port connectivity enhancement, port-linked industrialisation and coastal community development.

In September 2016, Sagarmala Development Company Limited was incorporated for effective implementation of these projects. In terms of project financing, the central and state governments are expected to provide three-fourths of the total funds. Besides, new sources of finance such as dollar-denominated loans are being explored to meet the huge requirement.

Progress under the four components

In the under-implementation category, the port connectivity component accounts for the maximum number of projects (~46 per cent) whereas the port modernisation component entails the maximum investment (~49 per cent) in projects. Meanwhile, 137 projects worth Rs 1,029.74 billion are under development. 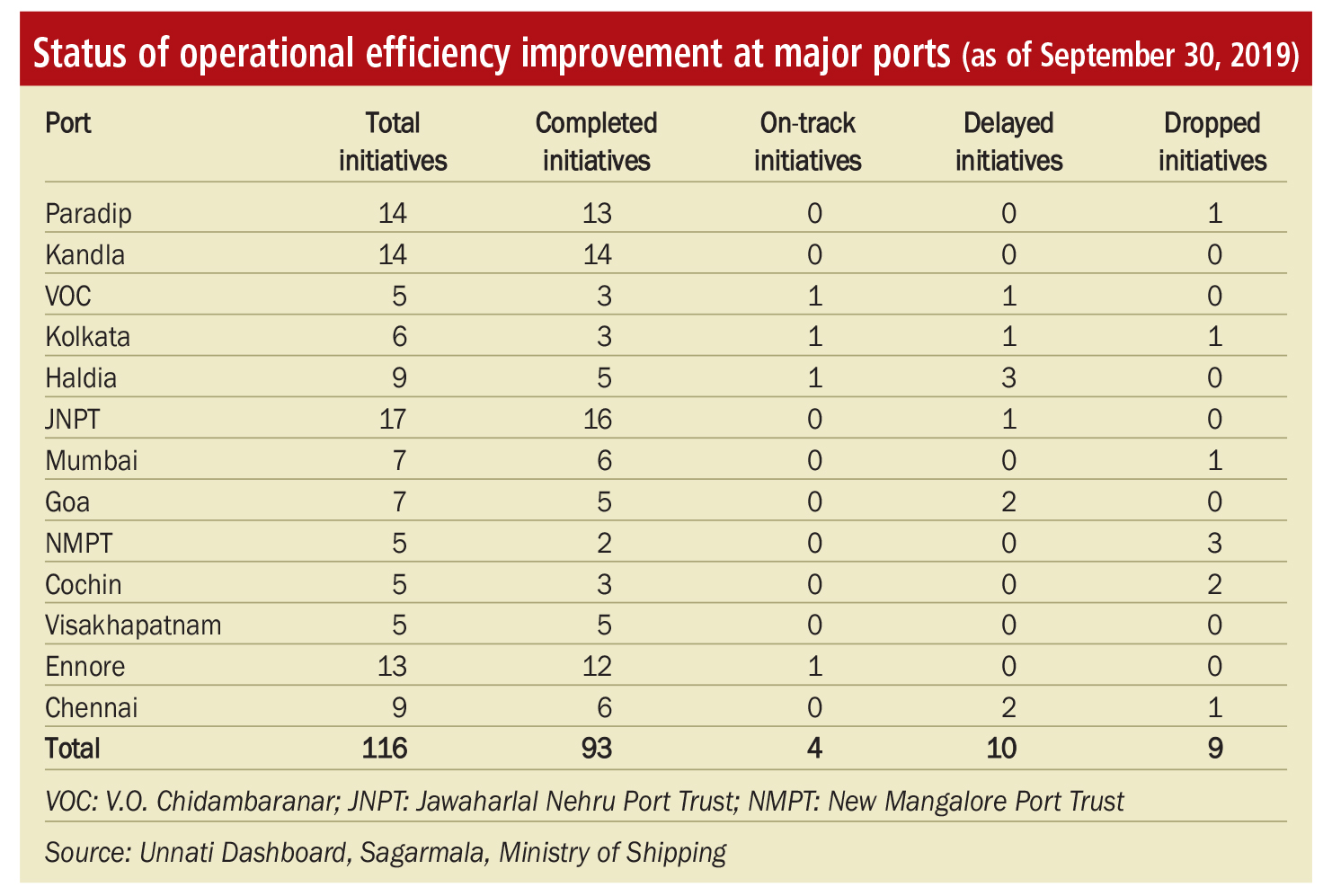 As per studies carried out under Sagarmala, cargo traffic at Indian ports is expected to increase to 2,500 million tonnes per annum (mtpa) by 2025. To cater to the growing traffic, a roadmap has been prepared for increasing capacity at the ports from the present 1,500 mtpa to more than 3,500 mtpa by 2025. This includes operational efficiency improvement at ports, capacity expansion of existing ports and new port development.

For improving operational efficiency, a study  (Project Unnati) to benchmark the performance of the major ports to comparable international ports was undertaken and the recommendations are being implemented. The study identified a total of 116 initiatives for implementation to improve the operational efficiency and profitability of the major ports. Of the initiatives, 93 have already been implemented to unlock more than 80 mtpa of capacity. In addition, enhancing the ease of doing business by streamlining procedures is also a major focus of the programme.

Till September 2019, around 68 projects have been completed at an investment of Rs 225.51 billion, while 70 projects worth Rs 369.98 billion are under implementation under the port modernisation and new port development component.

Of the total 235 projects, around 14 per cent have been completed under the port connectivity enhancement component, while 40 per cent are currently under implementation. Besides, the remaining 106 projects are currently in the pipeline – in the planning, detailed project report preparation and bidding stages. These projects entail a total investment of around Rs 2,355.28 billion.

Indian Port Rail Corporation Limited (IPRCL), a dedicated company set up to undertake last-mile connectivity projects, has taken up the implementation of 61 projects, entailing an investment of Rs 45.12 billion, for providing port-rail connectivity. Of these, 12 projects worth Rs 2.88 billion have been completed.

Meanwhile, the Coastal Berth Scheme (CBS) has been extended up to March 2020 and merged with the Sagarmala programme. Around 26 projects, costing Rs 12.06 billion, have been identified under the CBS. So far, funds totalling Rs 2.75 billion have been released to the major ports, state maritime boards and the state governments under the scheme.

Under this component, 14 coastal economic zones (CEZs) have been identified in Gujarat, Maharashtra, Andhra Pradesh, Karnataka, Tamil Nadu, Kerala, Odisha and West Bengal. Each CEZ will comprise multiple coastal economic units (CEUs) and more than one industrial cluster can be housed within a CEU. As of September 2019, two CEZ projects have been completed and 17 are under implementation.

Based on a detailed origin-destination study of key commodities, a total of 30 port-linked industrial clusters have been identified for development across the energy, materials, discrete manufacturing and maritime sectors.

The Sagarmala programme has a multi-pronged approach towards port-led development and is expected to revolutionise not only the maritime sector but the logistics sector as a whole. It is expected to increase export-import trade from the present 80 mtpa to 200 mtpa, thereby resulting in annual logistics cost savings of $4.5 billion-$6 billion and boost India’s merchandise exports to $110 billion by 2025.

However, given the broad scope of the programme involving multiple stakeholders, effective coordination among them is essential. So far, only 5 per cent of the projects (in terms of cost) have been completed and 51 per cent are under implementation; the remaining 44 per cent are still under feasibility assessment and at the planning/preliminary stages. Factors that are critical for timely and successful project execution are the implementation of enabling policies, robust institutional structures and appropriate financing and funding mechanisms.