The affordable housing segment has picked up significant pace in recent years. Owing to several demand and supply side interventions in the form of policies, budgetary incentives, government allocations, tax incentives and private sector involvement, affordable housing has emerged as the fastest growing segment in the real estate sector. In fact, it has emerged as one of the major drivers of the construction industry in recent years.

The Pradhan Mantri Awas Yojana (PMAY), the government’s flagship programme that aims to provide Housing for All by 2022, has been a veritable game changer for the affordable housing space in general and the construction industry in particular. The aim is to address the challenge of housing shortages amongst low-income groups in cities and empower homebuyers at the bottom of the pyramid by building 11.2 million homes across urban India and another 29.5 million homes in rural India by 2022. Further, the PMAY converges with the Smart Cities Mission to address the need for affordable housing, wherein several smart cities (about 66 out of the selected 100 cities) have included affordable housing as a part of area-based development in their respective plans.

The supply of affordable housing units by the private sector has also witnessed an uptick. The introduction of the Real Estate (Regulation and Development) [RERA] Act, 2016, has been one of the most significant reforms in the real estate sector in recent times. It was enacted by the government to protect the interest of homebuyers and has been a welcome move not only for buyers but also for developers as it infuses transparency and accountability in the housing sector. It requires developers to place 70 per cent of the money collected from a buyer in a separate escrow account to meet the project’s construction cost.

While reforms such as RERA have impacted the overall realty sector positively, it is the affordable housing-specific policy announcements in the form of goods and services tax (GST) rationalisation, accordance of infrastructure status, the public-private partnership policy and tax incentives that have helped enhance private sector interest in the segment.

In February 2019, the GST Council reduced the GST rate on affordable homes under construction from 8 per cent to 1 per cent. The new rate does not include input tax credit and is applicable from April 1, 2019. It is likely to reduce the price gap between under-construction and completed affordable housing projects and help in reviving demand.

More recently, the government announced the creation of a Rs 200 billion fund for offering last-mile financing support to salvage select stalled projects in the affordable and mid-income categories. The fund will help complete the construction of an estimated 350,000 units in these categories across the country.

In an effort to adopt sustainable living, countries across the globe are adopting greener building material and constantly innovating to bring new construction technologies on the table, and India is no exception. The development of innovative new building materials has enabled architects to better realise their aim of establishing structures that are stronger, flexible and more durable.

In India too, the government is keen on inviting technology companies to showcase their construction techniques to build affordable houses in India, and this augurs well for the segment. In order to encourage the adoption of emerging, disaster-resilient, environment-friendly, cost-effective and speedy construction technologies for houses under the PMAY, the government has launched a Global Housing Technology Challenge. Under the initiative, stakeholders in the domestic as well as global housing industry will showcase their construction technologies, of which the lowest-cost technology suited to a particular region will be selected through a bidding process and the developer will have to exhibit a Light House Project, each of which will comprise around 1,000 houses.

The Ministry of Housing and Urban Affairs is currently looking at implementing projects in six states. However, 12 states have come forward for Light House Projects till date. The projects will be funded by the government, which will provide Rs 0.15 million and an additional Rs 0.25 million grant for technology innovation, making it a total of Rs 0.35 million per house. 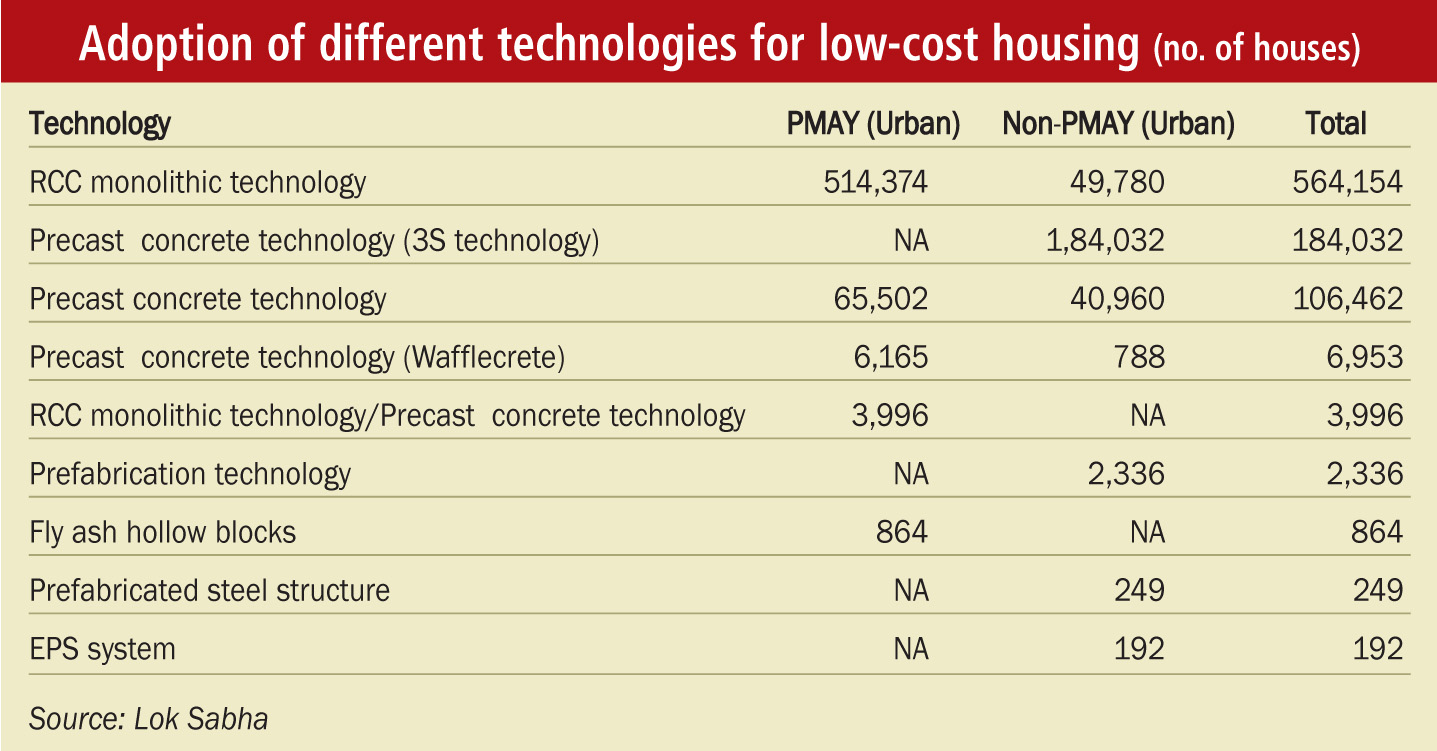 Further, the Building Materials and Technology Promotion Council is already working on demonstration houses primarily showcasing emerging technologies, and has identified/ evaluated 24 emerging construction technologies for mass housing. Several other new technologies are under research in premier institutions like Indian Institutes of Technology and others are under trial with NBCC (India) Limited.

Glass fibre reinforced gypsum technology is one of the most popular technologies currently in use in India. In Tamil Nadu, Karnataka and Kerala, various developers are using this technology to build houses, hospitals and schools. Meanwhile, the monolithic reinforced concrete construction system which ensures less manual intervention and complete elimination of plastering is being used in EWS (economically weaker section) housing projects in Karnataka, Andhra Pradesh, Odisha and Maharashtra.

Due to the widening gap in demand and supply of building materials, as well as the need for energy efficient and economical methods of construction, innovations in the materials and equipment market are also being witnessed. A Technology Sub-Mission  has been set up under PMAY (Urban) to facilitate adoption of modern, innovative, green technologies and building material for faster and quality construction of houses. Some of the innovative materials being used are glassfibre reinforced polyester/composites building products, bamboo mat corrugated roofing sheets, red mud and coir-based wood substitutes. 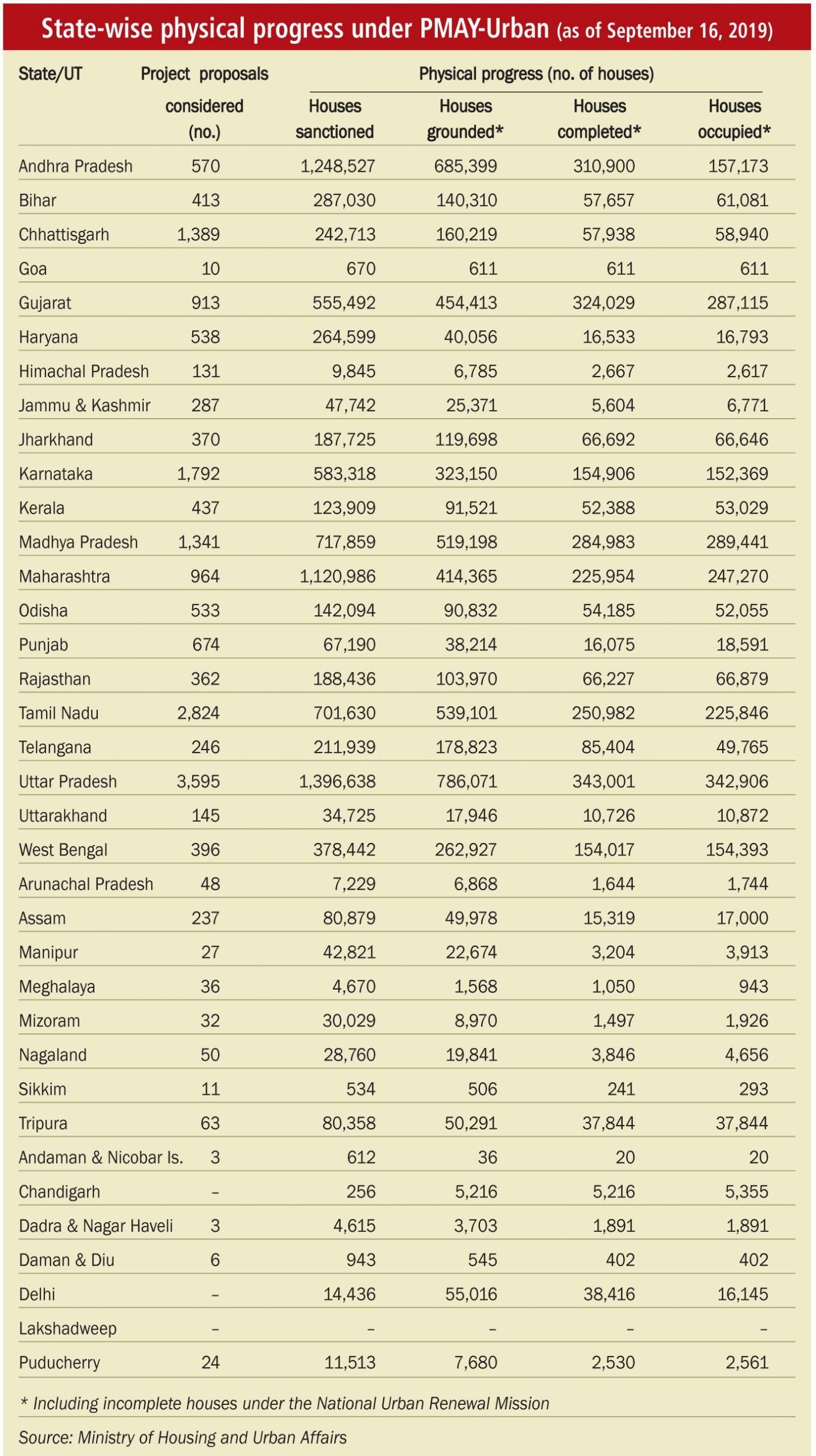 Meanwhile, for supply projections based on private developer projects, India Infrastructure Research has tracked close to 800 projects. These projects create a strong pipeline of over 346,842 units of 1 BHK and 2 BHK configurations by 2023. Of the total private sector projects analysed, about 82 per cent are at various stages of construction (mostly early stages), while the remaining are new launches that have been announced recently. Further, in terms of dwelling units, 276,927 units are at various stages of construction. About 80 per cent of these projects are slated for completion between 2020 and 2022.

To meet the ambitious targets, several steps are required. Unarguably, land – its cost, acquisition and financing – is the biggest issue that prevents developers from capitalising on the affordable housing boom. The ongoing liquidity crunch is another roadblock impacting developers at a time when housing demand is reviving slowly. Besides, developers have been seeking support with respect to their long-standing demands of a single-window clearance; alignment of centre-state policies; relaxation in the floor space index and density norms; creation of supporting infrastructure such as roads, water connections and transportation; and provision of subsidies for construction materials and affordable construction technologies.

Resolving these issues will go a long way in boosting developer confidence in this segment and thus driving demand for construction.