Indian ports handle almost 90 per cent of the country’s international trade volume. Of this, 55 per cent is handled by the major ports and the remaining by non-major ports. The prominence of the latter has been increasing over the years due to their strategic locations and extensive participation in optimising hinterland connectivity. Acquisitions in the port sector have not been a usual trend, as is being seen in the road, renewable energy and logistics sectors. The shipping industry has also witnessed limited transactions. In a major departure, there has been some activity in both the spaces in the past two years. Going forward, the proposed corporatisation of at least one major port under Union Budget 2020-21, the upcoming National Logistics Policy, etc. are expected to bring new players into the ports and shipping sector.

Mergers and acquisitions (M&As), including private equity (PE) investments, in the ports and shipping sector have only been a handful over the years due to the public sector-dominated nature of the sector. Since 2014, only 19 M&A deals have been registered for a total value of about Rs 420 billion. Of the total deal value, the acquisitions by Adani Ports and Special Economic Zone Limited (APSEZL) occupied a share of 52 per cent, reaffirming the prominence of this player in the sector. However, the past two years (2018 and 2019) witnessed a pickup in M&A activity with 10 deals being recorded for about Rs 229 billion. This was on account of a twofold strategy by companies – inorganic growth and tapping opportunities emerging from insolvency proceedings.

The major ports have been meeting their funding requirements through dollar-denominated bonds which result in a lower cost of debt. With regard to the privately run non-major ports, APSEZL is the largest operator and has been acquiring small as well as stressed ports for inorganic growth. A recent instance is the announcement to acquire Dighi port, which is currently facing insolvency proceedings. In 2018, Dighi Port Limited witnessed the commencement of insolvency proceedings under the National Company Law Tribunal (NCLT), following a petition by one of its operational creditors. The facility, owned by Balaji Infra Projects Limited and Infrastructure Leasing & Financial Services Limited, owed over Rs 30 billion to a consortium of 16 banks led by the Bank of India. This marks the entry of APSEZL into Maharashtra, one of the three coastal states in which it does not have a presence. The other two states are Karnataka and West Bengal. As per APSEZL’s resolution plan, the company will pay Rs 6.5 billion to the financial creditors, a 78 per cent haircut for them. In the shipping industry as well, Tebma Shipyards is undergoing the corporate insolvency resolution process. State-owned Cochin Shipyard Limited has been declared as the successful resolution applicant by the lenders to Tebma Shipyards.

Within the port segment, the following deals were struck:

Despite the high PE interest in the logistics and warehousing space, PE funding has been subdued in the ports and shipping sector. The only noteworthy deals were the $147 million (approximately Rs 10 billion) funding by Camas Investments (a wholly owned subsidiary of Temasek Holdings) in APSEZL in June 2018 and Fairfax India’s investment of $72 million (approximately Rs 5 billion) in Seven Islands Shipping in March 2019.

Recently, the National Infrastructure Investment Fund (NIIF), in partnership with DP World, set up Hindustan Infralog Private Limited (HIPL), through which it seeks to invest up to $3 billion of equity across the entire ports and logistics value chain. The NIIF-DP World collaboration has already made investments in the warehousing space. However, no deal has taken place in the port segment yet. 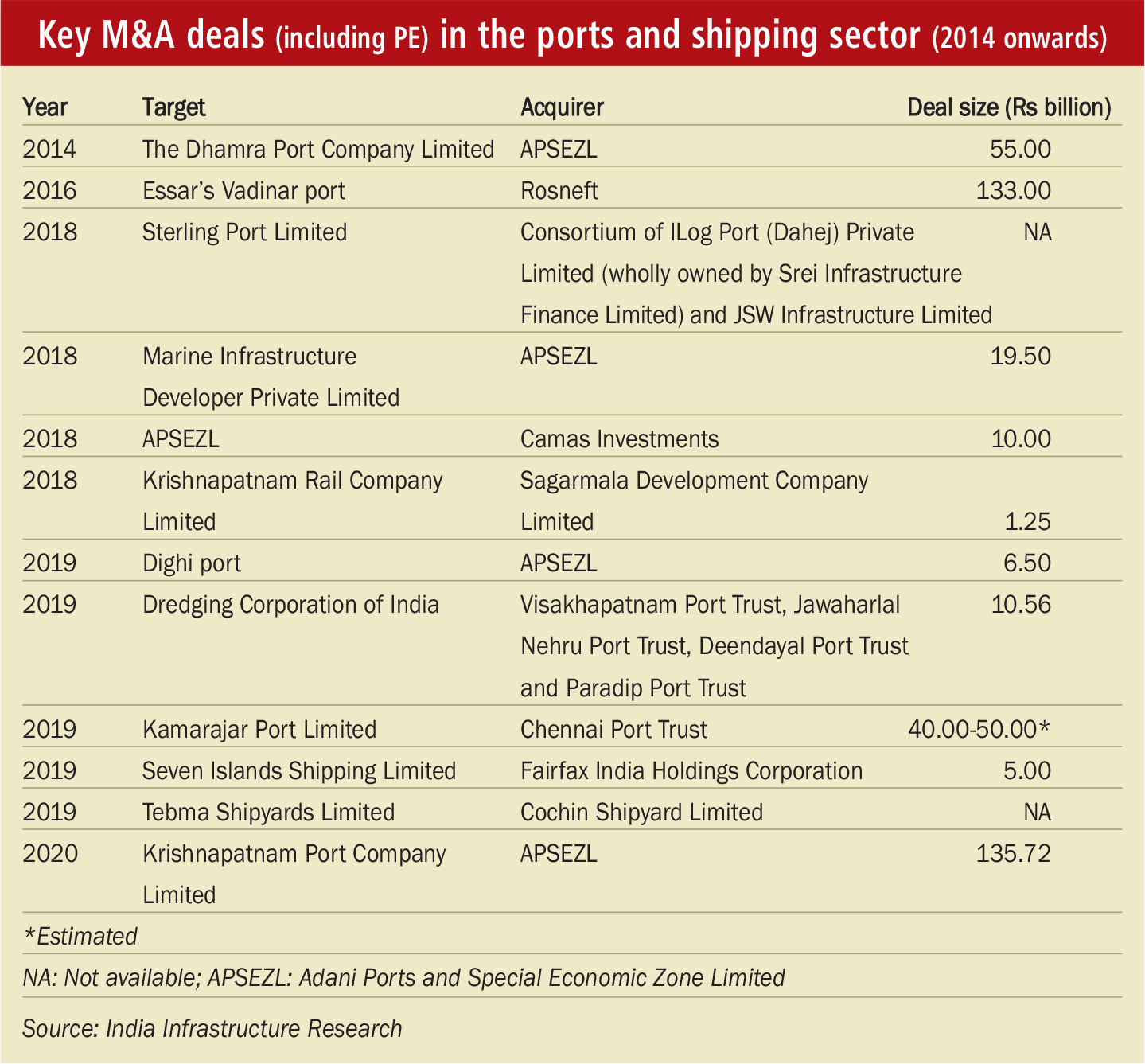 Favourable policies such as 100 per cent foreign direct investment, revision of the model concession agreement and tax exemptions for infrastructure development at ports have attracted a number of international players such as PSA International, DP World and APM Terminals. Besides, international players (such as DP World) are also looking to consolidate their assets. The privatisation plan of the Container Corporation of India is expected to draw marquee investors and see the likely sale of two port terminals. Port assets of Sical Logistics are also on the block, following the holding company’s strategy to deleverage subsidiaries on account of financial stress. Thus, the sector is offering acquisition opportunities to strategic investors.

Despite a slowdown in global trade due to headwinds such as the US-China trade war, breakout of coronavirus, Brexit, etc., there are opportunities for the shipping and logistics industry in emerging countries like India. The proposed National Logistics Policy is expected to provide the much-needed fillip to the supply chain segment, thereby lowering overall logistics costs. The policy is expected to address the issue of arbitrary and unfair charges levied by shipping lines. The government is also accelerating efforts to transform the country into a transshipment hub, and this will further the growth of the shipping industry.