Uttar Pradesh has emerged as one of the most active states in terms of pushing forward its expressway development agenda. Some of the key expressways developed by the state government are the Agra-Lucknow expressway and the Yamuna expressway. The recently awarded Bundelkhand expressway is one of the most ambitious expressway projects proposed by the Uttar Pradesh Industrial Expressways Development Authority (UPIEDA). The expressway also stands out as a successful example of a project with hassle-free land acquisition. This has been the case with most of the big-ticket projects being implemented in the state. Project implementation has mostly been on track apart from minor delays attributable to the tendering process. The project has finally been awarded in six packages, and construction work on the expressway is expected to commence soon.

In a move to connect the interior regions of the state, the Uttar Pradesh government conceived the 296 km four-lane access-controlled Bundelkhand expressway project in April 2017. The expressway’s alignment was finalised in May 2018, while the project received administrative approval on August 21, 2019. It will originate form the district of Chitrakoot and will traverse through the districts of Banda, Hamirpur and Auraiya. The expressway will end near Kudrail village near SH-91, to meet the Agra-Lucknow expressway.

The project has been divided into six packages and contracts for all six packages have been awarded on an engineering, procurement and construction (EPC) basis, after multiple extensions being made by UPIEDA for the bid submission due dates. Besides, over 93 per cent of the total 3,642 hectares of land required for the project has been acquired.

UPIEDA has been experimenting with innovative funding mechanisms to facilitate smooth implementation of its projects. The state government is planning to raise Rs 70 billion from a Bank of Baroda-led consortium of banks for the Bundelkhand expressway project, estimated to cost about Rs 148.5 billion. As part of the consortium loan, the Bank of Baroda has already sanctioned a loan of Rs 20 billion to UPIEDA. Further, under the 2019-20 budget, the Uttar Pradesh government has allocated Rs 10 billion for construction of the expressway. 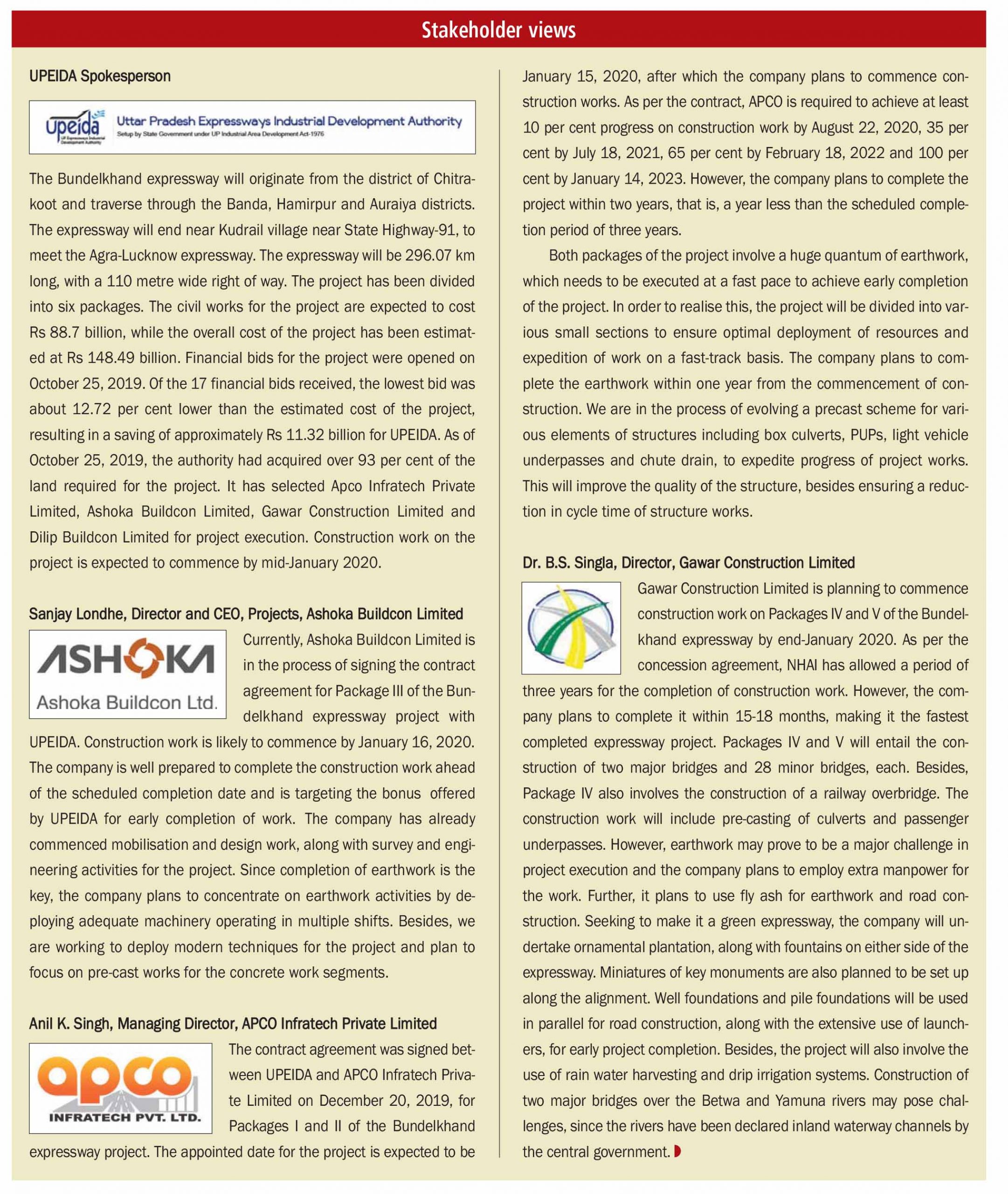 Expressways on the anvil

The Bundelkhand expressway is a part of UPIEDA’s plan to expand the expressway network in the state to 1,192 km by 2021-22. The foundation stone for the project is likely to be laid in December 2019. Upon completion, the expressway will reduce the travel time from New Delhi to Chitrakoot to about six hours from the current 12 hours.