The state of Andhra Pradesh has large tracts of agricultural land that requires substantial supply of irrigation water. However, the upland areas of East Godavari, Visakhapatnam and Krishna districts have no source of water supply other than borewells and fresh water from the Godavari river. Moreover, rain in the region is undependable often resulting in droughts. To overcome the challenge, the Water Resources Department (WRD) of the Andhra Pradesh government took up the implementation of a big-ticket multi-purpose irrigation project at Polavaram by diverting water from the Godavari river. Through the project, the government has an ambitious target of irrigating 291,000 hectares of land, producing electricity through a 960 MW hydropower plant and supplying 23,440 million cubic feet (mcf) of water for drinking and non-potable (industrial) purposes to the Visakhapatnam township and steel plant.

While it was declared a national project in April 2014 after the bifurcation of Andhra Pradesh into Telangana and the residual Andhra Pradesh state through the Andhra Pradesh State Re-Organisation Act, 2014, the project has faced contractual challenges and stiff opposition from locals and political parties. It is now being funded by the central government and is currently in progress, though at a slow pace. Inadequate funding and termination of contracts continue to hamper the progress of this mega project.

The Polavaram irrigation project, located in Polavaram in West Godavari district, involves diverting 800 billion cubic feet (bcf) of surplus water of the Godavari river to the Krishna river (Prakasam barrage) to irrigate a part of the command area of the Krishna delta. The diverted water will be shared among Andhra Pradesh, Karnataka and Maharashtra in a pre-decided proportion of 450 bcf by Andhra Pradesh and 350 bcf by Karnataka and Maharashtra.

As part of the project, a reservoir across the Godavari river with a live and gross storage capacity of 752 bcf and 19,460 bcf, respectively, will be constructed. Major head works involving the construction of a 2,454 metre (8,051 feet) earth-cum-rockfill dam across the main river with a full reservoir level of 150 feet and 48 gates spanning 1,070 metres (to control the release of water) with a length of 1,128.4 metres (3,702 feet) on the right bank will also be undertaken. Apart from this, a 960 MW powerhouse (12 Kaplan turbines of 80 MW capacity each) will be installed to generate electricity.

From the head regulator, two canals – a right main canal spanning 174 km and a left main canal spanning 181.50 km – will be constructed. The right main canal will irrigate 129,000 hectares of ayacut (the area served by an irrigation project such as a canal, dam or tank) in the upland areas of the West Godavari and Krishna districts. The left main canal will irrigate about 16,190 hectares of ayacut in the East Godavari and Visakhapatnam districts. It will also supply about 23,440 mcf of water for industrial and domestic consumption purposes in and around Visakhapatnam city.

The project, originally proposed in 1941 by the Madras Presidency, has faced a number of issues and challenges over the years. Initially, it faced interstate opposition and stiff resistance from political parties on the grounds that it would submerge hundreds of tribal villages thereby displacing thousands of people. To address these issues, several changes in design and structure were introduced and clearances were sought. It was only after 2004 that clearances related to forest, environment and wildlife were granted. On October 25, 2005, Stage I environmental clearance for the project was also accorded by the Ministry of Environment, Forest and Climate Change and other clearances were granted by 2009. However, the clearance process was investigated resulting in litigations by the Odisha and Chhattisgarh governments. Despite continued local resistance, work on the project commenced in 2005 after administrative approval for taking up the works of the right and left main canals and spillway worth Rs 37.93 billion was accorded. 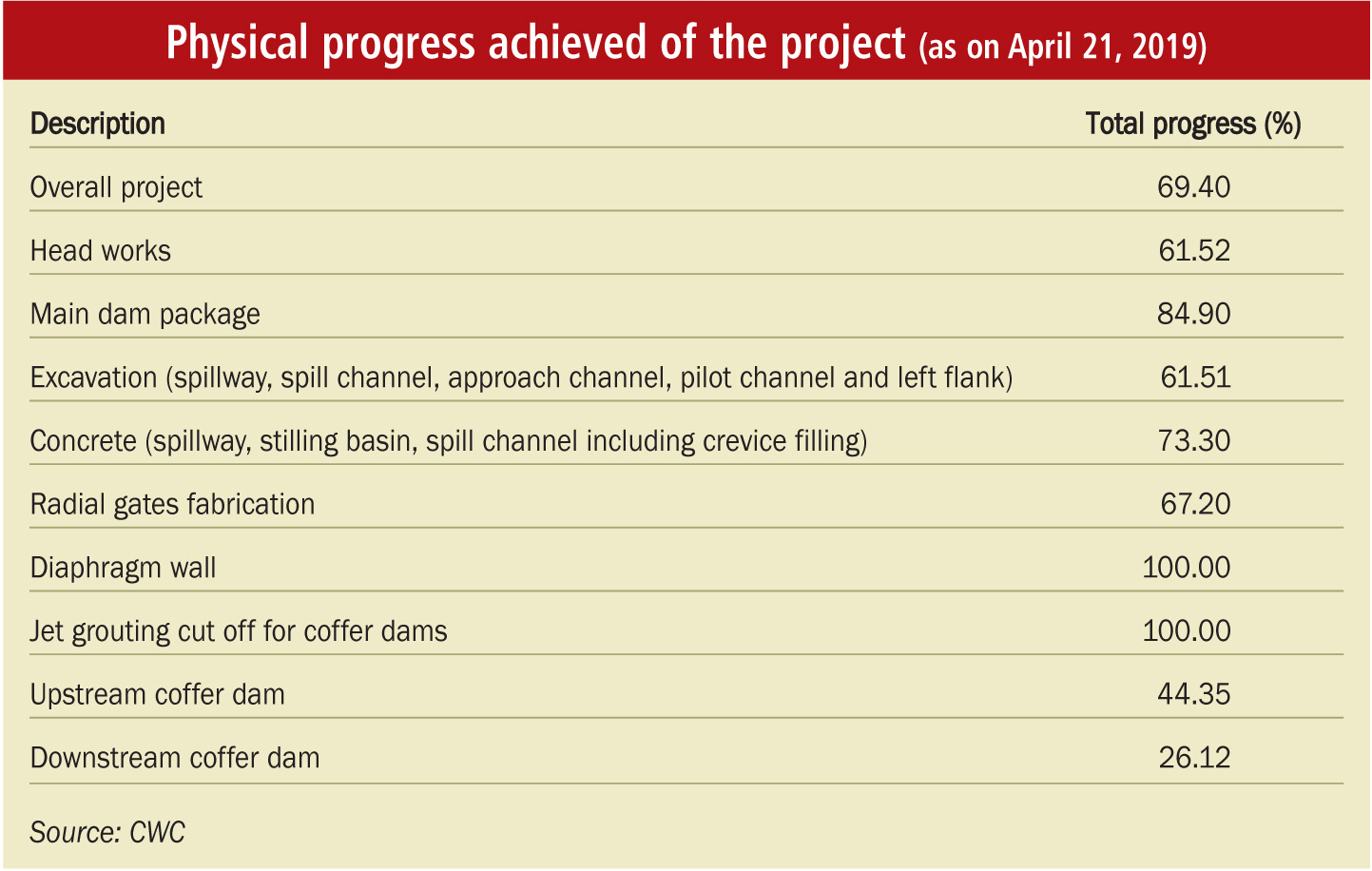 In November 2011, bids for the major components involving earth dam and spillway works were invited. However, these were cancelled due to political issues. Thereafter, in April 2012, bids were reinvited, and again faced opposition as the government opened bids of only two companies (of the six bidders that had submitted bids) and the joint venture (JV) of Soma Constructions and the China Gezhouba Group Corporation had emerged as the lowest bidder. Later, the government opened bids submitted by the other four companies and finally the consortium of Transstroy (India)-JSC Engineering Centre and UES (Russia) emerged as the lowest bidder. In March 2013, the contract for the main dam package was awarded to the selected consortium. Subsequently, contract packages were awarded to Navayuga Engineering Company Limited (NECL), HCC Limited, a JV of Patel Engineering Limited and Soma Enterprises Limited, Maytas and NCC Limited. 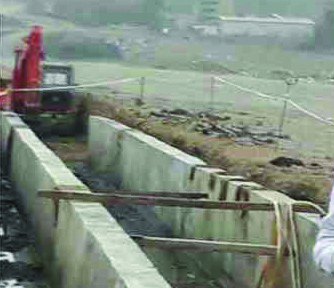 According to the latest progress report published by the Central Water Commission (CWC), about 69.4 per cent of the project work has been completed as of April 2019. With regard to the head works and main dam packages, 61 per cent of the construction work is complete. The project was initially expected to be completed by December 2019. However, in the past few months, two contracts have been terminated. In October 2019, the contract for left main canal package 5A that was awarded to PSK-HES agency in 2016 was withdrawn on the grounds that it was given on nomination basis without undergoing a tendering process. So far, the agency has completed 64.36 per cent of the works and the remaining works worth Rs 648.16 million are pending.

In August 2019, the WRD issued a termination notice to NECL, which was executing the main head works, and the Andhra Pradesh High Court ordered that the the project be stalled until a new contractor was finalised. The department adopted the reverse tendering process for awarding the balance works. In November 2019, Megha Engineering & Infrastructures Limited (MEIL) emerged as the sole bidder. The company quoted 12.6 per cent less (Rs 43.58 billion) than NECL, resulting in savings of about Rs 6 billion. On November 2, 2019, the work on the project resumed with MEIL laying the foundation stone for the balance works.

While NECL’s contract has been terminated, the company achieved a major feat in January 2019 when it set a world record of pouring 32,315.5 cubic metres of concrete into the spillway channel, thereby clinching two Guinness world records of pouring the highest amount of concrete and the largest continuous concrete pour in 24 hours.

Meanwhile, in January 2019, bids were invited for the construction of a 919 metre irrigation tunnel along the left main canal. Max Infra (India) Limited bagged the contract at a 4.77 per cent higher cost than the estimated contract value of Rs 2.76 billion. Later, the contract was terminated and fresh bids were invited by adopting the reverse tendering process. In August 2019, Max Infra (India) Limited once again bagged the contract though at a reduced contract cost of Rs 2.31 billion, thereby saving about 15 per cent of the benchmark cost.

Currently, the project is in progress and the scheduled commissioning has been extended to June 2020.

Recently, in November 2019, the Ministry of Finance has given clearance to the Ministry of Water Resources for the release of another Rs 18.5 billion towards reimbursement to the state government. Meanwhile, due to delays in commissioning of the project, a revised cost estimate of Rs 575.4 billion has been forwarded to the government for approval, though this is yet to be approved.

Since the very beginning, the project has been riddled with contractual issues and challenges, resulting in implementation delays, cost escalations and heavy financial dependence on government agencies. Addressing these problems is imperative to ensure timely completion of the project.

Once completed, a total of 13 districts of Andhra Pradesh, including the districts of East Godavari, Visakhapatnam, West Godavari and Krishna, will benefit from the project. Another 540 villages located in the command area will also be provided with drinking water. Apart from this, the states of Odisha and Chhattisgarh will also benefit with 5,000 mcf and 1,500 mcf of irrigation water respectively. However, for timely completion of the project, adequate funding has to be ensured. The approval of revised cost estimates has been delayed because of which the government is unable to release funds on time. To overcome this, continuous evaluation of project progress will be essential. Equally important will be dealing with deficiencies in contract documents and poor contracting practices. Net, net, the timely completion of all project components will depend on impartial contract enforcement and adequate support from the government and local community.