The rapidly expanding metro rail network across the country has resulted in an increase in the demand for robust and advanced rolling stock. So far, over 4,800 metro coaches have been procured for operational and under-construction metro projects in 14 cities. The market is set to expand further as new metro projects in Bhopal, Indore, Patna, Agra, Meerut and Kanpur are on the anvil. Expansion of operational metro systems, a key driver for metro coach demand, has also created the need to add coaches to existing operational lines. The Delhi and Bengaluru metros, for instance, are already procuring intermediate coaches to increase the number of train sets on existing lines.

In recent times, the segment has seen the entry of players such as Titagarh Wagons and the Modern Coach Factory (MCF). Further, indigenous production has gained momentum, thanks to the government’s Make in India programme. Players like BEML and Alstom have unveiled Make in India coaches equipped with state-of-the-art technologies and features. Given the huge capex requirements, metro rail corporations are now looking at innovative models such as coach leasing.

A total of about 4,847 metro coaches have either been procured or are under procurement at present. Of these, 3,446 coaches have been deployed on operational stretches spanning over 670 km of metro network. The Delhi metro, with approximately 348 km of operational metro length, operates the maximum number of coaches at 2,206.

Apart from operational coaches, another 1,401 coaches, contracts for which have already been awarded, are yet to be delivered. These include those for metro networks in Kolkata, Bengaluru, Delhi, Navi Mumbai, Mumbai, Hyderabad, Nagpur, Ahmedabad-Gandhinagar and Chennai.

With regard to the Delhi metro, in the past one year, contracts for an additional 120 coaches to expand the existing six-coach trains to eight-coach trains were awarded. Of the 120 coaches, the contract for 80 coaches, worth Rs 7.29 billion, was awarded to BEML Limited in October 2019 while Bombardier Transportation bagged the contract for the remaining 40 coaches in June 2019. These coaches are expected to be delivered by March 2021.

In August 2019, the contract for procurement of 102 aluminium coaches worth Rs 11.29 billion for the upcoming Pune metro (31.26 km) was placed with Titagarh Firema. The company will supply India’s first aluminium-bodied coaches. Meanwhile, 40 coaches for the Chennai metro expansion are currently being manufactured at Alstom Limited’s Sricity manufacturing facility and are expected to be delivered by 2020.

Besides this, 626 coaches will be procured for the ongoing Mumbai metro, Lines 2A, 2B and 7 (378 coaches) and Line 3 (248 coaches) projects for which contracts were awarded to BEML Limited and Alstom respectively. The coaches for Line 3 will be delivered by July 2020.

The size of the metro coach market is set to increase further with the development of new metro projects and expansion of existing lines. Light metro projects in Vijayawada and metro projects in Bhopal, Indore, Patna, Agra, Meerut and Kanpur are on the anvil which will create a huge market opportunity for rolling stock manufacturers.

Currently, bids for about 280 coaches have already been invited for various metro and monorail projects. Mumbai monorail, for instance, will get an additional 40 metro rakes, for which bids were invited in January 2019. As of October 2019, only two Chinese firms – CRRC Corporation Limited and BYD – have submitted bids and the technical and financial bids are yet to be evaluated. Further, bids were invited for 126 standard gauge metro cars with distance-to-go signalling systems and 90 cars with communication-based train control (CBTC) signalling for the Bengaluru metro, Phase II, in March 2019. The contract for this is yet to be awarded.

Meanwhile, the Delhi Metro Rail Corporation invited bids for procurement of 24 standard gauge coaches that will be utilised for the Airport Express Line expansion (1.7 km). The bids are due by November 27, 2019. There are also plans to induct nine-coach trains for the upcoming Delhi metro, Phase IV, the first such trains for a metro project. Moreover, bids are expected to be invited soon for the Kanpur and Meerut metro projects and the bid documents are currently being prepared.

Till now, the rolling stock market primarily comprised players such as Hyundai Rotem, Alstom, Bombardier, BEML, Mitsubishi, Construcciones y Auxiliar de Ferrocarriles, CSR Zhuzhou and the Integral Coach Factory (ICF). Recently, another player – Titagarh Firema – entered the market by winning its first metro coach contract for the Pune metro. Apart from this, the MCF forayed into the market and tied up with Finnish-Russian digital solutions provider Zyfra in April 2019 to execute a Rs 1.5 billion rolling stock contract. Zyfra will offer its technology and expertise to develop world-class coaches by 2021. Reportedly, two other players, Kawasaki Heavy Industries and Hitachi, are also expected to enter the rolling stock market. 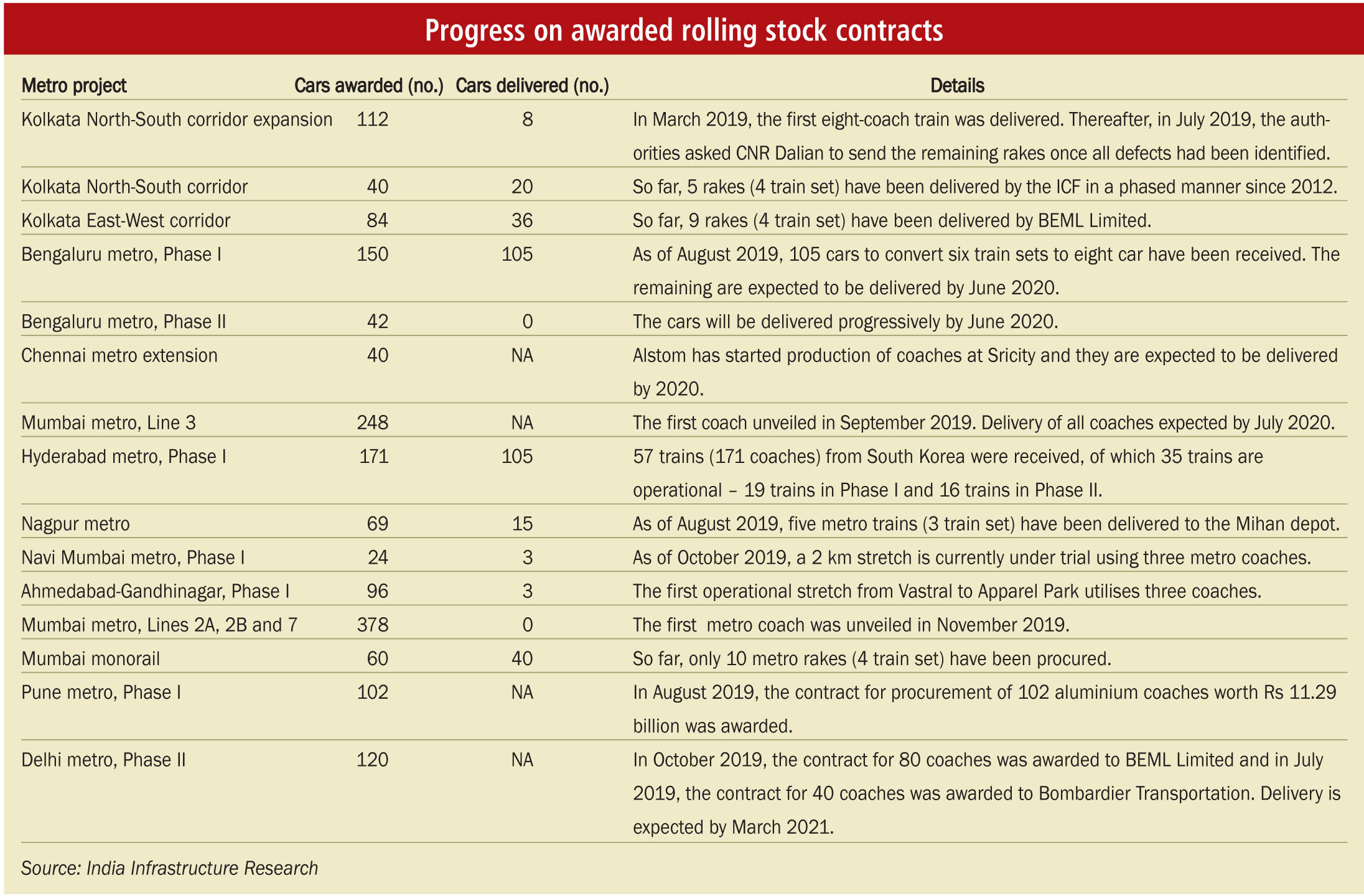 With the launch of the Make in India initiative, several manufacturing facilities have been set up in India for assembling coaches in-house. Alstom, for instance, developed a 100 per cent indigenous metro fleet for the Chennai, Lucknow and Kochi metros at its manufacturing facility at Sricity in Bengaluru. In November 2019, Alstom unveiled the first metro coach for the Mumbai metro, Line 3. Notably, the coach has been developed with over 80 per cent indigenous content in terms of manufacturing. In September 2019, BEML too exhibited an indigenous mock-up of a metro coach developed for the Mumbai metro, Lines 2A, 2B and 7 at its facility in Bengaluru.

The indigenous coaches, similar to their foreign counterparts, are equipped with world-class features and technologies. To minimise human intervention, unattended train operations (UTO) will be introduced on coaches being developed by BEML for the Mumbai metro, Lines 2A, 2B and 7, similar to coaches currently plying on the Delhi metro’s Magenta Line. The coaches being developed by Alstom will have the latest CBTC signalling technology including UTO, computer-based interlocking and centralised train supervision, platform screen doors, and safety features like CCTV cameras, smoke detectors, emergency intercoms and fire extinguishers.

The development of metro lines not only in metropolitan but Tier II and Tier III cities has created huge market opportunities for rolling stock providers. Manufacturers have reaped significant cost benefits with the Make in India initiative but for operators, arranging upfront capital and incurring operations and maintenance costs on coaches continue to be major bottlenecks. In this regard, leasing of metro coaches is being envisaged. Metro corporations of Delhi and Bengaluru have already planned to lease trains from private firms, where the private player will be paid for operating trains on an hourly and per km basis. With such innovative initiatives, efficiency in providing services will be ensured without undermining the financial viability of the projects.